The Rocking Chair Ranch name and brand are seen in many Texas history schoolbooks and dates back to the early 1850’s. Mr. Blair M. Boyd bought the ranch in May 1903 and lived on it until the summer of 1907 when he moved to Hillsboro, OH. The ranch was then leased to different parties for the next 52 years. The ranch under the present ownership was bought in 1958 from Mr. Boyd. From 1958 until 1966 the ranch maintained about 300 commercial cows. During these years the ranch produced several champion pens of feeder steers in San Angelo, TX. The RCR had over 10,000 acres dedicated to the improvement of Herefords. We at the ranch believe without our modern improvements that it would be impractical for us to try to raise the bulls in volume that our present operation consists of. We have spend the last 50 years making practical improvements that are now enabling us to produce bulls in volume and at an economical price to our customers.

In 1965 the first registered heifers stepped off the truck. These first thirty heifers were purchased from Walter Hill, Comanche, TX, and the breeding of these heifers was that of Walter’s famed sire, Colorado Domino 161C from the Banning-Lewis Ranches in Colorado Springs, CO. Cattle were soon added from such noted herds as Hull Dobbs Ranch, Tic Tac Toe Ranch, Albert Mitchell, and Hall-Nance Ranches. The main bloodlines consisted of Battle Intense, Colorado Domino, Husker Mischief, and Mischief. These cows have proven to be productive, good milkers, with size and quality. Our cow herd now numbers about 350 mother cows, and is culled each year on calf production, milking ability, individual conformation, and weaning weights.

The Lipan Spring Division was added in 1970, from the Warings Estate. William Scherz, a German stonemason from Sequin, built a native rock spring-house in 1880 to protect the spring. The stagecoach stop house was built of cut rock by masons in 1881. Both of these structures are standing and in use today. The two story house was built in 1898, and additions were made in 1984. With the joining of the Union Pacific rails in sight in 1896, Ben Fickling and Frederick Shollinger received a contract for weekly mail services between San Antonio and Fort Smith, Arkansas, with a branch route to El Paso, Texas. The service was inaugurated in 1868, following Bryan and Bartlett’s trail as far as Lipan Springs and continuing north to the Concho Mail Station, three miles southwest of Fort Concho. At this point, the branch known as the San Antonio-El Paso Mail Line began. Kickapoo Springs, Lipan Springs, and then Pecan Station was the route traveled by the stage. FM 1223 is actually the old Fort McKavett Road. Lipan Spring has never gone dry and vaies in flow from a low of 40 gallons a minute to 1000 gallons a minute during wet years. The Concho Valley Archaeological Society has stated that this is, by far, the most extensive and significant prehistoric and historic site yet recorded in the county.

In the late 1970’s seven large lakes and an irrigation system were constructed to provide water to grow hay for the ranch. In 1973, Whitehead decided to beautify the area by using native rock to create and channel to a lake immediately off the spring. Today, after several years of work, the spring area has become the show place of the ranch.

The cows are divided into two calving groups, fall and spring. RCR runs a very strict culling program and emphasizes fertility, udder development and structural soundness. The cow herd is made up mostly of L1 Domino and Canadian-bred cows. A large part of the cows go back to CL1 Domino 0005, an L1 Domino 75901 son that sold to Gino Pedretti in the 1981 Cooper-Holden Sale for $100,000. 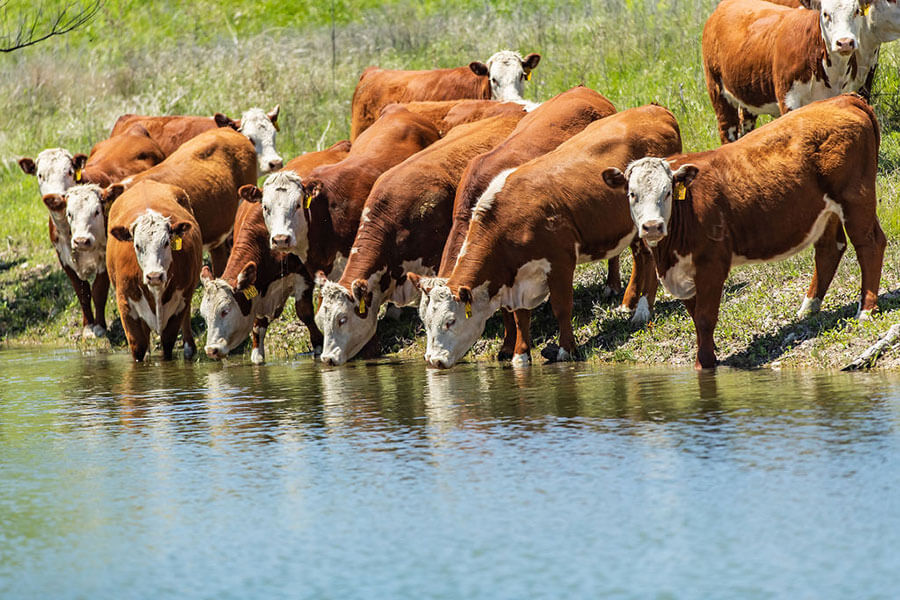 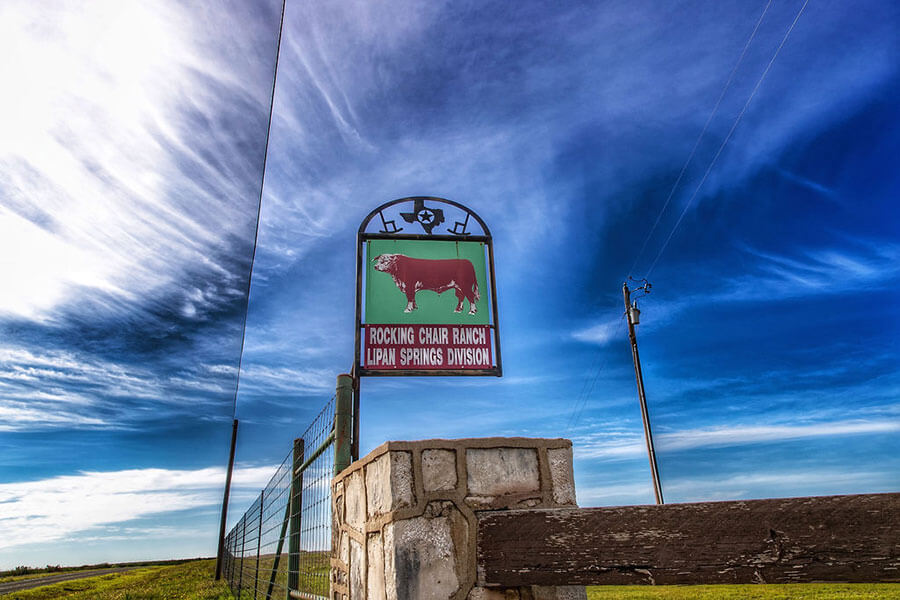 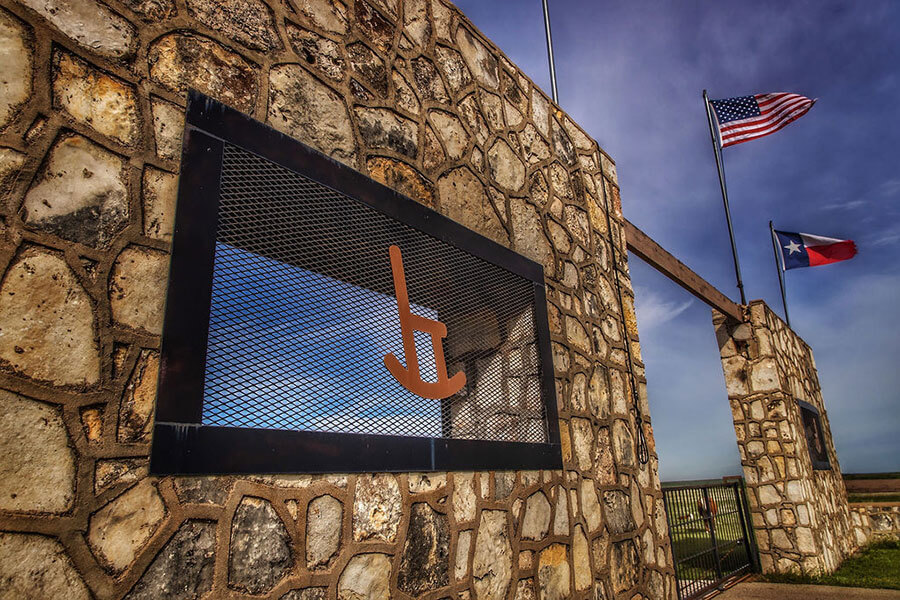 Born into the ranching family of C.B Whitehead of Brady, Texas, Loyd Whitehead has known ranching all his life. Loyd bought RCR in 1958, and has added ranches in Fort McKavett, Schleicher, and Tom Green County. Today, he has 6 additional ranches where he devotes his time and attention.

Loyd has remained active in various civic organizations and leadership positions. Below are to name a few:

As a previous board member of the Board of the American Hereford Auxiliary, Carol Whithead remains an active member since 1980. Along with raising two daughters, she became involved in fundraising for cancer with the Cattle Baron Ball committee in Dallas. Since living in San Angelo, Carol’s time has been spent serving on the board of the acclaimed San Angelo Museum of Fine Arts.

West Texas Rehab Center is a passion for both Carol and Loyd. They both work tirelessly to help with fundraising for this most worthy rehabilitation center for all of West Texas. Carol has the privilege of teaching the eighth graders who attend St. Ambrose Church for religious education. Carol has two grandsons, Kasen Tate Mull and Loyd Campbell Perks. There’s no doubt that volunteerism and serving others runs deep through her heart.

Gentry Whitehead graduated from Wall High School and went on to Texas Christian University. She is currently seeking her masters in accounting at Angelo State University. Gentry enjoys spending time with her son, Kasen. She is also a member of the Texas Hereford Auxiliary.

Brie Perks developed her first love for Hereford cattle at an early age by growing up showing cattle. She graduated with a Business Degree from the University of Texas at Dallas and also from the Ranch Management program at TCU.

Brie has served in the roles of both Director and Treasurer on the Texas Junior Hereford Board, a member of the Board of Directors of the Texas Hereford Association, and served as Director and VP of Texas Hereford Auxiliary. She is the current President (2013-2015) of Texas Hereford Auxiliary. In addition, Brie has worked at the Superior Livestock Auction in Fort Worth. She and her husband, Wade Perks, of Rockford, IL, have a son, Loyd Campbell Perks born 12/5/12, and a daughter Jade Channing Perks born 10/29/2015.